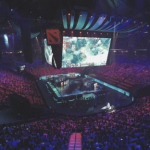 You are reading
Dota Tournaments

The esports are here to stay, demonstrating that video games are not a simple way of entertainment, but a unity requiring teamwork, hard training and competitiveness. In recent years we have seen an exponential surge in the competitive scenes of various games, but there is a tournament that has always broken many eports paradigms, we talk about Dota 2, which gave life to one of the biggest tournaments in the world The International

The International 2019, also known as TI9 by Dota 2 fans, is the Esports tournament that took place in Shanghai, China and brought together the 18 best teams in the world; whose objective was to take over the Immortal Aegis. This edition of the IT was organized for the first time on Chinese lands, one of the countries that saw the rise of esports in general, this was reflected when the tournament tickets were exhausted in less than a minute. According to the analysis, this is the largest Dota 2 tournament and Esport tournament in general.

The Dota 2 World Cup celebrated its eighth edition, as the first edition of this important Esports championship was held in 2011 caused a stir in the industry, since it was the first time that a video game tournament reached the Million dollars.

The amount has been rising in abysmal numbers as they passed editions of this championship Esports of Dota 2. In the 2018 edition, the prize offered was 25 million dollars, a figure that has just been surpassed with this new The International 2019, which reached over 34,300,633 million dollars. Money was distributed among the 18 teams that participated in the TI9.

Eighteen teams that are best in the whole world and who qualified through series of pre-qualifying tournaments running from October until June known as the Dota Pro Circuit. In addition, there were six playoff brackets for the different regions of the world: Europe, China, North America, South America, CIS and Southeast Asia.

In the final of The International 2019, the OG team defeated Team Liquid. Thus, they were crowned Dota 2 World champions and took a prize of USD 15 million. It is the second consecutive year that OG is in the first place and it was the first time that one team won the International twice.

The European team, which was formed in 2015, is made up of Sébastien “Ceb” Debs, Jesse “JerAx” Vainikka, Topias “Topson” Taavitsainen, Anathan “Ana” Pham, and Johan “n0tail” Sundstein.

In the first game, Team Liquid beat OG; but then the team recovered, and in the end, they won with a score that was 3-1.

The Dota 2 World Cup, which is known as The International, is one of the most important and its leader in the esports gamer world.

078
© Most Impressive and Popular Game Mods | History of Dota. All rights reserved.