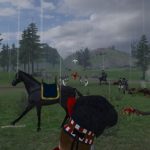 You are reading
Mount&Musket: Battalion Review

Mount and Blade: Warband’s leading multiplayer mod, Mount and Musket: Battalion. Was created by the members of the 22nd regiment of foot, a regiment that started life as a realism clan/group who played Battlegrounds two, a HL2 modification also based around the technology and warfare of the Napoleonic wars and Era while they both take slightly different focuses (one looks at the American war of independence and the other the actual Napoleonic wars both are of the same overall military Era)

Where Battleground Two was made as a remake of the original Battlegrounds but updated to the source engine and later the Orange box update. created around standard Capture the flag, capture point, and death match modes and making no major game mode innovation and only bringing new novel game play to the online multiplayer mod scene. The main attraction of Battlegrounds Two came from its community, and the creation of Line Battles. Including maps, and modified game modes. 22nd was a leading part of this community making maps, running both public and private line battles, and working with the other leading clans in making line battles and realism game play a major part of BG2. When Mount and Blade: Warband was conceived and had multiplayer support, and the mod potential to the same degree as the original Mount and Blade. The members of 22nd decided that they could modify it from the ground up to be a line battle simulator. While it does have other game modes and styles this is what it was created to do. As with BG2 the line battle community is what pulls Mount and Musket forward to new heights.

Firing into the fray!

When played as a line battle simulator. It is almost without fault, the guns are perhaps a bit too inaccurate but the feeling of the muskets is right, naturally a gun that does have trouble hitting the side of barn should have trouble hitting the side of a barn in the game. However the way Mount and Blade warband’s ranged weapons were designed in the first place by the developer meant that modifying them into actual firearms, does strain the system due to how projectiles work. Making aiming more difficult than it should be, and for a novice practically impossible. One thing that I did find initially frustrating but this is purely subjective and opinionated rather than a problem with the system, reloading didn’t feel right to me. It wasn’t too long it wasn’t bad it just wasn’t right. I can’t put my finger on exactly what is so, different about it perhaps it’s the fact that it is quite a long reload time but with not much of an indication as to how much time you have left that makes it disconcerting, combined with the fact that when you move you cancel the reload process. While this is all realistic, the ability to reload a Napoleonic musket while running, and quickly I would expect to be practically impossible. However sometimes realism must be put behind game play, and I think perhaps if the reload time was slightly quicker it would make the game feel a lot better when you are exchanging volleys.

What is a line battle?

A line battle is a game mode or type, based around Napoleonic warfare with the self-same tactics employed that Wellington or Napoleons infantry would have used when fighting each other.

Units consist of infantry and a commander who leads the infantry and employ volley fire from a “line” hence the name Line battle to fight the other line, while advanced tactics can be employed often due to the accuracy of the fire arms involved this was the most efficient way to kill each other. To find out more information on line battles in Mount and Musket visit the Mount and Musket forums here:http://forums.taleworlds.com/index.php/board,179.0.html

For a game based around the Napoleonic war the melee combat is just as important as the ranged exchanges, and it again feels powerful, meaty and is very fun. The one thing that is noticeable about the melee combat is the fact that it works, quite often in Mount and Blade games you have the guy who has got all the skill in the world and thus got all the armour in the world and thus is practically invulnerable. The MM developers have found a solution to this with their fixed unit class system, if the class is available you can take it and none of them have any armour of worth putting the emphasis on blocking skill, and precision. Rewarding the game for skill rather than for the amount of Denars you could pump into your equipment.

This quite honestly could go either way.

Balance is an important feature for any multiplayer game especially one that does not offer any single player experience as a way to practise the game play and the skills required for it. With weapons almost all being balanced and what appears to all units having pretty similar skill sets. The only differentiating factor between players is their own skills. Cavalry are however a nuisance, they seem to be practically unstoppable to your infantry (as they should be) but the counter to cavalry, Lancers, generally seem to use their lances to run down enemy infantry rather than skewer enemy cavalry. This is obviously only a generalization and a problem in public servers however with the power cavalry have it does add that strong atmosphere which makes a game stand out, the slight hint of fear when enemy cavalry are riding you down and you know you only have one shot does give the game a lot of atmosphere and does really make it stand out.

When played in its standard ‘battle’ form MM does add fresh new game play to Mount and Blade, which does make it very satisfying to play however if that’s all you do with this mod then you are missing out. If you want to play this mod to its full potential either Join a regiment or go to one of the public line battle’s then you can get every single ounce of enjoyment out of it. Mount and Musket deserves its position in Mount and Blades server browser as one of the more highly played mods, due to its balanced, fun, and diverse nature. Providing a good varied game play due to its innovative and often overlooked realistic game modes and Line Battles, the strong realism community also provides another reason to play the game, as all good community can make or break a good multiplayer experience.