You are reading
TITAN: XCIX Review

TITAN: XCIX is the name of a science fiction adventure title built on Half Life 2. Long being followed by us at ModSentry, we were given the chance to pre-release review it and sadly I couldn’t make the deadline on the weekend–on such short notice–and only a matter of a few hours before release basically.

That said, Titan is an interesting idea in a relatively unique setting as far as source mods go. Off the cuff I will tell you that the very concise and cleanly written sprawl on the moddb page has more information on the entire project than Part one has for you in game, but the obviousness of the story (Sabotage, betrayal, or even a spy) are all built into the fabric of even just the general “vibe” of the game, even moments into it.

My opinion on Titan varies from step to step, so I will give this review in rare sections.

Very interesting art direction as it reminds me of a first person (and sometimes third or “Directed” in cutscenes) Sins of a Solar Empire. The red and yawning vistas of the vaults of space, the ship architecture, the color pallete and choice of clothing–its all very TEC-esque from that gameworld and its an aesthetic I like quite a lot.

Inside the ship graphics seem to fall to nearly Half Life 1 dimensions. I’m aware making custom solids and models in Source can be a tremendous pain, and expensive as well, so I cannot fault the team here. But being built on the Episode 2 engine might be misleading, as it looks nothing like it as far as raw horsepower is concerned.

Luckily for us the aforementioned art direction holds up even when being as… whats the word, empty? As the ship is. Corridors are completley bare, piping or vents or lights are rare and only in the most minor amounts. Everything is shadowless, “fuzzy” and while it may sound critical this is important for immersion–there looks to be no life at all aboard the titan. No litter, boxes, offshoot rooms, offices, crates, equipment, and rarely just even people walking around. The world is barren and dry, both visually and literally. think the only thing that seems roughly implemeneted are the Deus Ex-esque holograms, of a seemingly alien language, but they come out of thin air without a backup LCD screen or projector to help them. Even in the grim darkness of the future, people use technolgy, not magic. Apparition should not be here. 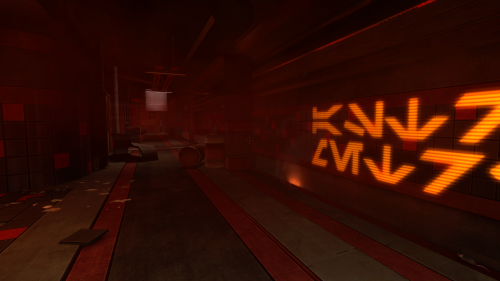 Voice Acting, sadly, might be the weakest area for Titan. The captain is voiced with a sarcastic muse that is entirely unfitting to what he’s saying, and he seems to extend the ending cylables on every one of his lines for dramatic effect. Jones, likewise, sounds slightly emotionless and has that distinctive Snake Plissken growl most voice actors seem to strive for on projects like this but he isn’t convincing as it, and as such doesn’t come off as a charismatic captain more as a gruff soldier. As characters, I know and care for nothing about them, as they both seem so far written as measurable tropes with predictable bite and writing. They don’t feel loved or fleshed out, something a source mod needs always to do.

When dealing with science fiction I’m afraid characters are, far and away, the most important part of the story with the extended mythos of the universe taking second place. This formula has been tried and true by countless titles, all the way from Mass Effect to Cowboy Bebop to even Firefly. Not comparing Titan to these titles, of course, but merely corelating my point with some evidence that, indeed, character writing should be first place by a long mile.

The mythos seems relatively big and expansive but with uninteresting, bland names that every modern RPG or Sci-Fi title seems to generate. I don’t know much about the systems or the empires or even the characters, but they seem more written and fleshed out than the characters, so I am looking forward to learning more.

I can’t really say much here one way or the other, this feels like a micro teaser for whats to come and was only under an hour long. Titan holds an interesting premise but so far I cannot say it fully lives up or dies to it. It’s on the fence, 50/50, it is but isn’t. I think this part was a little too short, and I know it will garner hype and interest for sure, but the team must look forward to hard work and polish if the other parts will suffice for science fiction fans.