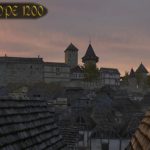 You are reading
Europe 1200 Updated Beta 5

The Mount and Blade: Warband mod which aims to recreate Europe during 1200 has just been updated. The new version brings the Kingdom of  Hungary into the steadily growing map. The update boasts 68 new settlements which are added on to the already considerably sized game map. Keeping true to their words, the team are moving from the West to the East of Europe, with a vast area of West Europe already finished there is no reason to not try this mod now. The majority of the Hungarian items  in this version however but you can look forward to those in the next update.

028
© Most Impressive and Popular Game Mods | History of Dota. All rights reserved.