You are reading
Comatose: Part 1 Review

Currently there is only one part to what is apparently a, “semi-episodic,” Half Life 2 mod, what this means for a release schedule, I have no idea. It is however safe to assume that there will be more episodes of Comatose coming in the future. It should be remembered that being only one episode, the mod is currently very short and can in fact be completed in under 10 minutes.

Comatose is essentially a puzzler, you wake up in an abandoned apartment and are tasked with escaping to the parking lot below, that’s it so far. There is potential for the story to grow, but I can’t reveal why, at risk of spoiling it for those who have yet to play it.

The first thing that struck me after I started a new game and witnessed the opening title crawl (which featured a puzzling choice of music), was a rather copious amount of blood. Normally, I wouldn’t use the word copious, and have in fact misspelled it both times I’ve written it, spell check is most definitely the greatest thing to come out of any software package. Ever. My reason for doing so however is I realised; whilst playing the mod, that the ability to speak and write in the English language is a highly underrated skill, as I’m sure people of other nationalities will feel about their native tongue. To put it simply, when some of the first words said by the protagonist (through subtitles, no voice work here unfortunately) are, “Who I am?” It’s not a very good sign.

Blood, from the butchering of the English language.

I’m going to differ from my normal format of leaving complaints to the end as, while I feel that Comatose is a great concept I also feel it has more flaws than strengths, I’d rather give constructive criticism, than pretend the mod is something it isn’t. My main complaint to give, is that Comatose is unpolished, polish is obviously nowhere near as important as the core gameplay, but I’ll come to that later. Presentation is one of the more important things to consider when releasing something to the general public. It would be unfair to base this opinion on the lack of comprehensible English, which to be fair isn’t the most widely spoken language in the world, but there’s just a lot here that could use tidying up.
While some puzzles do have environmental clues (usually in the form of blood on a wall) associated with them, others are too confusing to work out without mindless mashing of the use key, while others just don’t make sense. One features you finding what looks like a door handle on top of a fridge (or freezer dependant on how into independence you are), after scraping it into every door in the building I eventually threw it at a wall, it then magically attached itself to a window, allowing me to open said window and shimmy out along the ledge below it. All but one of the puzzles can be accomplished in this way; find something that looks different to the thousands of other props in the room, which are either paint cans or cardboard boxes, then drag it into everything else.

My final complaint is that, although this is at heart a thriller, it attempts to delve into horror, twice… in one room. These admittedly made me jump a little, even if the music meant to accompany them was a little late, but they would have been much more impactful if they had been spread out, or saved for a later episode after a satisfactory amount of tension had been built up.

This next comment falls into the middle of being both good and bad, the mod has two endings. The final scene consists of a sequence where you, armed with a pistol, can choose to either stand still and be taken into custody (though not before receiving a stun baton to the face) or rise up and fight your oppressors. One ending being easier to achieve than the other is what I consider to be the positive side to this idea, the negative however is they both end the same way, so as to tie into the next episode. Once again no spoilers here.

Now onto what I liked about the short time I spent playing Comatose. The idea itself is a solid one, if poorly executed. This is a rarely explored genre of both games and mods. In the long run, having to use your wits to escape increasingly stressful situations, like a modern day, hobo MacGyver could work out well, providing significant improvements are made to the presentation and puzzle design. 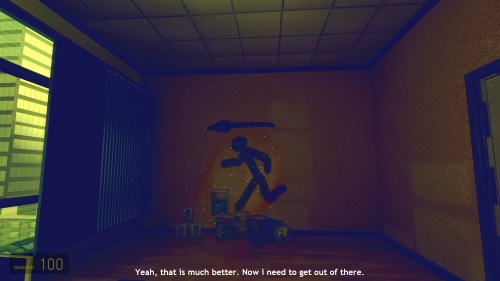 As you play through the first half of the mod, your objective is to find something to stop your bleeding; the bleeding itself brings another obstacle in front of HoGyver. Up until you find the item required to satisfy your wound’s hunger, ceasing its fatal drooling, your health slowly ticks down and can only be brought back up by finding pill bottles scattered around the map and your vision is blurred to the point where you might have to use the flashlight in order to see certain objects. It’s a nice touch, and while it certainly isn’t the first time I’ve seen it used, it makes sense to be there.
The slowly decreasing health of the player acts as a good incentive to try to solve the puzzles as quickly as possible, which to be fair is exactly what you’d want to do were you bleeding from a knife wound that was making you see a health meter in the bottom left corner of your vision. This does unfortunately cause the bad puzzle design to become more evident as you become increasingly frustrated when what should work doesn’t.

Overall it’s difficult to say what I thought of Comatose, I’d like to say I enjoyed it, it did have its moments but it definitely requires a lot of work before I can recommend it. Though don’t let me stop you from trying it out, it’s something different and some people over on Moddb have said they quite enjoyed it. While I’m not going to say Comatose is a waste of time, I will say that there are better mods out there you could be playing.

048
© Most Impressive and Popular Game Mods | History of Dota. All rights reserved.