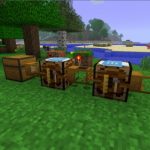 You are reading
BuildCraft – Not Just Another Cog In The Machine 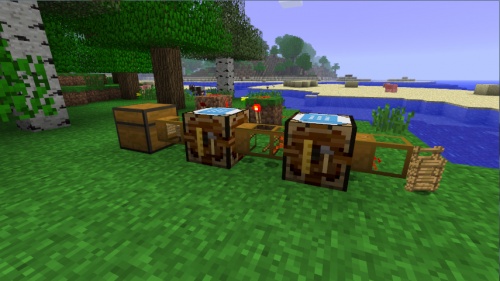 Most people who play Minecraft will be familiar with how much effort is required to build just about anything vaguely impressive, running around finding the right blocks and ingredients. There will be a few of you will see the previous comment as the proper way to get the job done, deriving satisfaction from all that time spent on the task, while others may want to speed things up a touch. For these people they previously had tools such as MCEdit, which let you construct blocks of materials or more complex shapes from schematics, however this may have been a bit too much like cheating.

However, there is now a light at the end of the tunnel, in the form of BuildCraft, the happy middle ground. What BuildCraft aims to do is create a set of new craftable components that let you automate some of the more monotonous tasks, such as mining or block placing.

The first component you will probably encounter is the Pipe system that helps automate the movement of resources. The pipes can be crafted out of each crafting block type and each have their own special function, for example Wood lets you toggle the direction the resources will flow, while Obsidian will suck in all loose blocks nearby. You can even connect the pipes to a chest and have the resources from that chest move through the pipes to another location or work bench, using Diamond pipes as a filter.

The component of BuildCraft that benefits from the simple but effective pipe system is their Automated Crafting Tables. All you need for these to work is to lay out a certain crafting recipe and set the pipes up to deliver the appropriate supplies and the crafting table will output the crafted item.

Next up is the mining tools, of which you have two available for a fair construction price. The Mining Well, which is a single block that mines straight down and periodically spits out the broken blocks it creates on the way down. The second option is the much more impressive Quarry, which sets up a frame over a reasonably large area and then begins mining down over the entire area using a nifty looking laser drill. Each of these won’t destroy the resulting ore drops and you can put a chest next to the controller block to store all of them automatically.

The automated Quarry in operation

Lastly, you have the automated construction tools, the Filler and the Builder. These two blocks operate using blue torches called Landmarks to plot out a three dimensional area for the system to use for construction. The Filler is the simpler of the two, where you can input a recipe on what you want it to create within the given space and the blocks to use for construction and it will happily get to work. However you’ll want to give it a flat surface to work on or it may get stuck.

Using a Filler block to construct a house

The second is the Builder, which lets you use templates of block construction to replicate that block layout. This helps with a lot of modular building work, as you can just build the initial section and create a template for it and then use builders to replicate those modules.

This mod does require the use of ModLoader and ModLoaderMP in order to work however.

041
© Most Impressive and Popular Game Mods | History of Dota. All rights reserved.