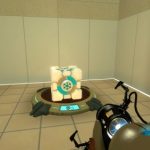 You are reading
Blue Portals Review 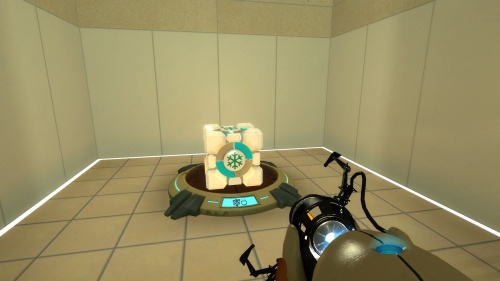 I want to start off by saying that I loved the original Portal. Not in a, “Hey guys the cake is a lie hawr hawr hawr,” kind of way, but it’s one of the two games (the other being Half Life 2) that made me realise my future was going to be in game design. Due to my love of the game I have since become very good at it, to the point where co op in Portal 2 was boring for my partner because I’d solve the puzzles about 5 minutes before he understood what I’d just done. Needless to say I was very confident in my Portal prowess. I say was, because I have just played through Blue Portals and it is difficult.

The first thing I should say about Blue Portals is that virtually everything you see is custom content, the portals have new sound effects, the turrets use new dialogue, the walls of the test chambers use very well made textures which, though they are very different to those seen in Portal, they don’t feel out of place. It’s clear to see why this mod took two years to make (that’s roughly the same amount of time that goes into each Call of Duty).

If difficulty were an image, it would be this one.

Blue Portals begins with you as a test subject in what is known as the, “Blue Portals Development Centre.” You are tasked, as is standard with Portal, to solve a number of increasingly difficult test chambers using the Portal gun (Aperture science handheld portal device if you’re nerding out at me right now). Similarly to Portal you begin without the gun and pick one up, shortly after the game starts, with the ability to shoot one blue portal with the other, orange portal being pre placed. This is where Blue Portals sets itself apart from the game it is based on. In the single player campaign, you never get the option of placing that orange portal. All the way through the mod, the puzzles are based around that same idea that the first, easier half of Portal was, so how could it be difficult?

Soon after you complete your first few tests with the Portal gun, the mod starts introducing new test elements, at first these are things like new types of weighted storage cube; blue ones are immune to fizzling, red ones melt ice but fizzle when they hit water, ice cubes are fizzled by red ones and so on. The new additions don’t stop at cubes however; cube catchers (they catch cubes) act as a new type of button, magnets repel, attract and levitate cubes, light and water are even used in the latter half of the campaign. All of these additions make sense in the context of the gameplay and add to the complexity of the increasingly difficult tests.

I should probably take a moment, as is custom, to talk about the story. There isn’t one, or at least not one that makes its presence known with a four string quartet and firework display, Blue Portals is a graduate of the Left 4 Dead School of storytelling, there is story there, you just have to look for it. The mod even takes this a step further by having Left 4 Dead style graffiti covering the walls much later into the campaign. One thing some might see as a problem, but I thought was a great departure from what is usually seen in storytelling, is that the story doesn’t end in some stunning reveal as you might expect. Without spoiling anything, the campaign has a fitting ending for a story that doesn’t take itself too seriously (also it has some of the best credits I’ve seen in a mod in a long time).

A special mention should go to both the music and voice acting used. The music is great, it saddens me that you can only hear some of it if you find hidden radios in some test chambers playing them, but if you look hard enough you might just find a hidden room which provides you with a download link to the entire soundtrack. The voice acting, while not exactly Nolan North, is very well done, the turrets in particular are given a personality similar, though not identical, to those seen in the original Portal. Lines are delivered well, and while the main, robotic voice guiding you through the tests can be difficult to understand at times, it does a good job of giving you a break from the frustration caused by the previous test.

What really surprised me with this mod was the amount of tests which were so modestly called, “Bonus content.” This content includes, some test chambers using the blue portal only mechanic, submitted to the mod by other mappers, time trials which challenge you to complete various tests from the campaign as fast as you possibly can, then there’s an option called, “Extended play.” Now we come to my first gripe with Blue Portals, the extended play content was not advertised anywhere near as much as it should have been. Were I not playing the mod with the purpose of reviewing it, I may have completely missed what I consider to be the most fun part of the entire experience. As you might expect, these tests introduce a few new test elements, such as a cube which can store and emit light, you are also given the ability to control the placement of the second portal. But it does something else which cannot go without mention, a few tests into the extended play content, you are introduced to what is referred to as the, “Enhanced cyclical handling operating device,” or, “ECHO.” It’s a gravity gun; they put the Zero Point Energy Field Manipulator into Portal. I can’t really say much about it without giving away solutions to some of the harder tests, but it is fun and helps make some of the best level design seen in a Portal mod stand out.

Double portal all the way…

No review would be complete, however, without complaining. Let me first say that the positives outweigh the negatives here in the same way that a Star outweighs Hal Jordan and two Jets (why didn’t he just use 50,000 rockets?), so do not let any of these dissuade you from downloading and playing through one of the best mods I’ve played this year.
Firstly, there are a few instances in the campaign where I found myself solving puzzles in ways that hadn’t been introduced particularly well, or at all. One in particular, where you are required to gain momentum by falling through the same portal multiple times in order to gain height coming out of the other. This was a technique I was familiar with, due to other custom test chambers, but had I not already known how to do it, I would almost certainly have needed to use a guide.
I also noticed a few glitches, such as the inability to see through a portal in one chamber, and a door that wouldn’t open even though I had triggered it (noclip was the eventual solution).

Other than a few frustrations I had which were a result of the engine and weren’t the fault of the development team, that is everything bad I have to say. Every new test element introduced was easy to understand, the test chambers were thankfully less forgiving. More care went into this mod than went into some superhero movies starring Ryan Reynolds and Blake Lively.

If you own and loved the original Portal and are looking for a challenge, then download Blue Portals.

06
© Most Impressive and Popular Game Mods | History of Dota. All rights reserved.