You are reading
Empires Review 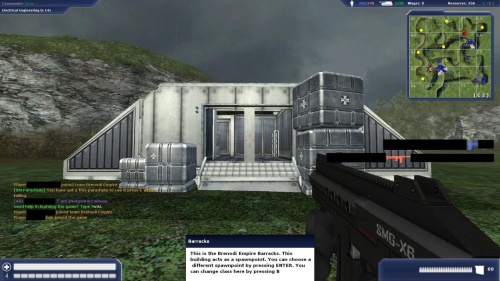 The first time I fired up Empires I thought I knew exactly what I was getting myself into, a multiplayer only, Source engine mod, I thought I’d be able to get a feel for any additions fairly quickly and be gunning down the best players the mod had to offer in no time. I was so unbelievably wrong that I want to build a time machine for the single purpose of delivering past-me a swift kick to the groin.

Empires is a rare beast, one of those mods that comes along out of nowhere and really surprises you with its depth. There are three different genres at play here; FPS infantry combat, vehicular combat similar to that seen in the Battlefield franchise and an RTS element. Each carrying its own style of play which will need to be mastered if you hope to satisfy the mod’s intelligent, albeit slightly irritable community.

You play as a soldier in one of two warring factions; the Brenodi Empire, a modern militaristic force who are at war with the Northern Faction, the rebels fighting for their freedom… I’m assuming. Both sides play roughly the same and your choice of team will mostly only affect the aesthetics. Both teams are balanced differently, something i didn’t immediately notice (that’s a good thing), the rate of fire on one gun may be higher than the other team’s equivalent but do less damage per hit. This is also true with the vehicles, with the ability to have a secondary gunner in a Brenodi APC while the Northern faction’s Light tank is slightly better than that of the Brenodi’s (thankyou Devourawr for pointing this out to me).

Imagine this but with more brown and rust… You just imagined the Northern Faction.

As an infantryman your job is fairly standard and will be familiar to most team based FPS players, shoot the hell out of the other guys and complete the objective. To do this you have four classes: The Rifleman, the game’s assault option, armed with your choice of a mid-close range assault rifle, a long-mid range assault rifle or a mini-gun with so much kick you’ll need to crouch or go prone in order to use it effectively. Next is the Grenadier, as you might expect this class specialises in explosives either through use of a fairly accurate rocket launcher, a mortar launcher which was surprisingly fun to use and landmines effective on both infantry and vehicles.

Then you have the Scout, Scouts have the ability to use two SMGs, one accurate but with less firepower and the other slightly more powerful and better suited to close range combat. Scouts also have access to scoped rifles, aka: Snipers. These weapons do a hefty amount of damage and will usually kill in two body shots, or one shot to the head, when scoped however you will often find yourself fighting against the reticule to aim straight, this makes lining up headshots rather difficult but can be overcome with practice. Finally players can choose to be an Engineer, while Engineers can only use the same two SMGs as their Scout buddies they make up for the lack of firepower with the ability to construct turrets and radars, drop ammo crates for their teammates and repairing vehicles and structures. All that and being essential to winning the damned game, a lack of turrets may mean an over abundance of enemy vehicles or infantry all up in your grill, players will need ammo constantly and radars and cameras provide easier tracking of enemies.

Along with these weapons each class access to either one or two sidearms and a selection of grenades, dependant on the class. Additionally players get to choose up to four skills, dependant on the rank they have achieved in the match, these skills are the same across each class, players can choose from; a health boost, health regeneration, ammo increase, rapid stamina regeneration, increased accuracy, higher melee damage and faster running speed.

Vehicles, while not available in every map, add a lot of fun to the game. You have a choice of either a Jeep, an APC or a Light Tank, as you might have guessed, Jeeps are fast but lack any considerable firepower, APCs are great at mowing down infantry but contemplate their mere existence when up against other vehicles or buildings, and Tanks blow stuff up. These vehicles are customisable, by which I mean you can change the weapons in use. So sorry, no go faster stripes for you.

Each team has a Commander, voted for before the match begins by the players. The Commander controls the battle from a bird’s eye view familiar to most RTS players, placing structures such as vehicle factories, walls or barracks, giving orders to specific groups of players and sitting safely in his command vehicle like a boss. The creation of structures requires resources which adds another level of depth for the Commander to worry about on top of researching upgrades… As you might be able to tell, it’s a wee bit difficult.

One thing I noticed after playing on a few servers, was that there wasn’t really too much competition for who wanted to be Commander, usually one person would opt in, the team would vote him up and the game would start. Puzzled by this I decided I’d opt in my next game and see what all the fuss was about. About 30 seconds later the subject of the fuss slapped me in the face. 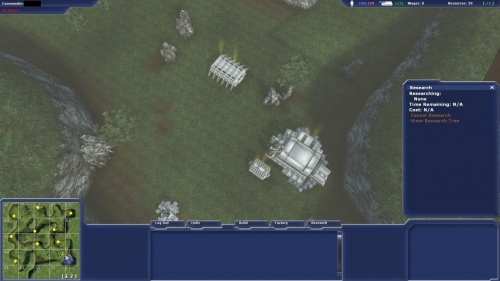 I will be seeing this UI in my nightmares for the rest of my life.

Being a Commander is very stressful, especially if it is your first time, if you are playing this game and haven’t been a Commander before, don’t expect your hand to be held should you click the opt in button. Thankfully I managed to figure it out quite quickly due to my RTS prowess, relying on my team to request upgrades, pretending I was just about to start said upgrades… Needless to say it went pretty well. The fact that we eventually lost due to them having an experienced Commander is irrelevant.

Graphically the mod looks nice, for a Source engine mod, it’s not Crysis but it’s not outdated either, the game uses a lot of custom models which all look nice and have a fair amount of detail. The mod uses some of custom sound effects for the guns, a few don’t make much sense such as the snipers sounding like peashooters compared to the pistols but all around there aren’t many problems.

Now onto some problems I noticed with the mod. Firstly is the design of some maps, while a large selection of the official maps are well designed and as balanced as possible given the freedom of building placement, others suffer from flaws which lead to matches consisting of grenade/mortar/rocket spam.

Imagine this for 30 minutes…

One example of this (see above) is the map emp_district402. The centre of the map is essentially a bucket for you to throw explosives into, the victor is decided by which team can use the least amount of tickets respawning their players, which effectively comes down to staying as far back as possible with engineers acting as medics reviving teammates and everyone else lobbing all manner of grenades and rockets at the other guys, who will be doing the same thing.

Secondly there are a few bugs I noticed such as sound effects not always playing, becoming stuck on ammo crates when being revived by an engineer (the only way out was suicide) and a tendency for vehicles to take off when confronted with mines. These are bugs common with other Source engine mods, but they are present nonetheless.

Overall Empires is definitely worth your time, if you can overlook a few rare bugs and get to play on one of the larger maps where the mod really shines. Anybody who owns a Source engine game should definitely give this a try.