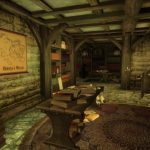 Dibella’s Watch has just hit its first update milestone with beta 10. It’s becoming almost redundant for us to tell you that the update contains plenty of new stuff because that pretty much sums up every update that Antiscamp puts out.

One of the major features of this update is a ‘fix’ for a bug that has plagued the mod. While Antiscamp did initially try to squash the bug with a workaround involving players downloading a third-party mod he eventually embraced the bug into the mod’s lore. It’s a nice approach to the problem and gives the mod an interesting quirk. Though hardcore Khajiit and Argonian players may mourn the loss of their precious tails at least there is a mod canon reason for it.

Along with the ‘bug fix’  comes plenty of the usual including a multitude of corrections to the mod and location additions. I’m personally interested in the University Libary that has been added onto Constanze University which is planned to hold a lot of lore about the island which I’m a sucker for. Aggressive players fear not, as usual you can expect new places to go kill stuff including a large new dungeon on the west side of the island.

In fact there is far too much stuff in this update that even Antiscamp had to cut his post short to tell us to download the mod. So we’ll do the same, download this mod right now, ignore the beta status, this is the best upcoming Oblivion mod that is actively releasing right now. While you’re at it, follow the mod on ModDB