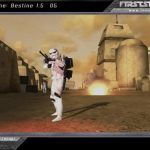 You are reading
Blast From The Past – First Strike

”With the Rebel Alliance growing stronger every day and the Empire spread thin as it is, it’s no longer a battle of technological might, but simply a matter of who strikes first…”

The Battlefield is an incredible franchise. The core franchise never had a story unlike the Bad Company spinoff series. However this is what made it so great, the person behind the screen could just log on, shoot an opposing player  and forget about the world beyond. Crouching with sniper in the wide open spaces stalking a target with adrenaline rushing through your veins, flying across the battlefield unloading your deadly cargo on targets below, the Battlefield is full of memorable moments. With this in mind the franchise easily became a classic .

This isn’t the first collision of these two classic franchises. Battlefield: 1942 has the legendary Battlefield: Galactic Conquest mod which similar to this mod, took that Battlefield gameplay into the Star Wars universe.

First Strike is both a singleplayer and multiplayer mod for Battlefield 2142 which was released in September 2007. This new Battlefield experience was developed by the First Strike Development Team who take you back in time to a galaxy far, far away. Now you can join the war between the Empire and the Rebellion in a struggle to rule the galaxy. Play the Star Wars total conversion of Battlefield with an entirely new arsenal of weapons and vehicles inspired and derived from the expansive Star Wars universe.

For the more tactical gamer there is the campaign mode, a more serious online mode full with only the most dedicated players. Ditch the random run and gun gameplay for the ultimate immersive Star Wars experience. The campaign

That is not all, what is a Star Wars game without exciting space encounters. In First Strike you can load on your Astromech Droid and fight in the large scale battles that Star Wars is so well-known for. Space battles, up to 64 players online, famous star wars battles and an extremely authentic atmosphere. Is something worth going back to the past for.

The mod is very much still alive for anyone interested in it. It’s the perfect way to get a refreshing taste of the Battlefield experience while you wait for Battlefield 3.

0165
© Most Impressive and Popular Game Mods | History of Dota. All rights reserved.