You are reading
Canvas Interview 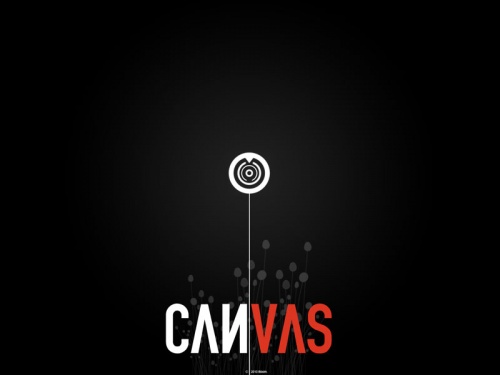 Today we have a very special interview with the team at Canvas. Canvas is a half-life 2 mod that with in a few days of being announced has been gaining more and more influence in the modding community.

1) How did Canvas start?

Tay : It started out as a project between me and ex-Nightfall coder Matt “Wraiyth” Stafford – we got a few people on the team from the Nightfall project and the ball kinda rolling. However Matt left to pursue other ventures rather early on on the development process so it all fell down to me to manage it lol. We had the idea after playing Psychonauts (which was a totally awesome game btw, except for the platforming part) and initially we wanted to focus the gameplay on character possessions, where the player can play as other characters and interchange between them.

2) Canvas looks absolutely stunning how did you go about doing this?

Tay : Well I’ve always been pushing the Source engine to its limit (and believe me it fights us every step of the way) but we basically had to pull out a lot of tricks from our sleeves. In this process I have learned a lot, I even discovered some stuff the engine could do that nobody ever uses! As a matter of fact I’d say I’m still not happy with what we have and will continue to push more as the dev cycle progresses.

I think this is were I left my keys…

Arran: I think also it’s down to who is in possession of the tools. I mean, Source may be ageing considerably but teams have proven still, that it is possible to make gorgeous environments if the right people know how to go about it. It’s very easy to make something look god-awful if you haven’t got the patience to brawl with the engine, but it’s something that feels all-the-more rewarding if you achieve it with Source. It feels more satisfying for some reason, like you’ve ‘tricked’ the engine into working with you.

3) How did you go about choosing the team for Canvas?

Tay : They are mostly people who I’ve met on interlopers.net, as I was active on there for quite some time. There are also people back from the old Nightfall project who I trust to be talented and reliable as we have worked side by side for years. I think we believe more in a person with a thirst to improve him/herself than somebody who is very talented but is quite stagnant in terms of personal growth. There have been a lot of people who came and went, some because they got industry jobs, and some because they disagree with how the mod was run, and granted, it was ran rather poorly at times. The stress of running a mod by yourself can be rather overbearing and I’m sure a lot of mod leaders can testify to this fact.
Arran: Yeah, a large percentage of the team derive from interlopers. And it seems to be a breeding ground for good talent. I joined the team back in March of last year I think? I was a big fan of Tay’s previous work and artistic influence. I just continued to pester him till he gave in and let me join the team haha.

4)How long has Canvas been in production?

Tay : I would say about 2-3 years, initially it started off really slow and as Matt left the period spent making the foundation was marred by bad management and unclear goals. However we stuck by the project and it brought us here we are today, a small first step to a larger picture.

5) The games story ( So far ) is amazing and really creepy, what made you go about doing the story like this?

Tay : Every time I go on moddb I see a slew of mods that essentially copies each other in terms of premise, perhaps not intentionally but suffice to say most people will agree that the idea pool right now in gaming is pretty stagnant. I’m sure our story is not the most original ever but we’re very dedicated to telling it properly. I want to introduce a more cinematic element of storytelling, nor necessarily cutscenes, but a more interesting way of going about with your exposition rather than have characters drone on and hammer you with information. To that end, we’ve spent an incredible amount of time on gestalt details, items that are around the world hinting at the backstory while not telling it outright; again it’s not groundbreaking and we never pretend to be, it’s just something we want to do as a team.

Arran: This again was something that attracted me from the start. It’s sometimes hard to look at the state of the PC gaming scene and see an original concept break out, not just in the industry but also within the modding community. Most source mods never seem to stray too far from the grasps of the Half-Life universe and that’s a shame. Canvas possesses this depth and soul, and for me a delightfully dark art style. 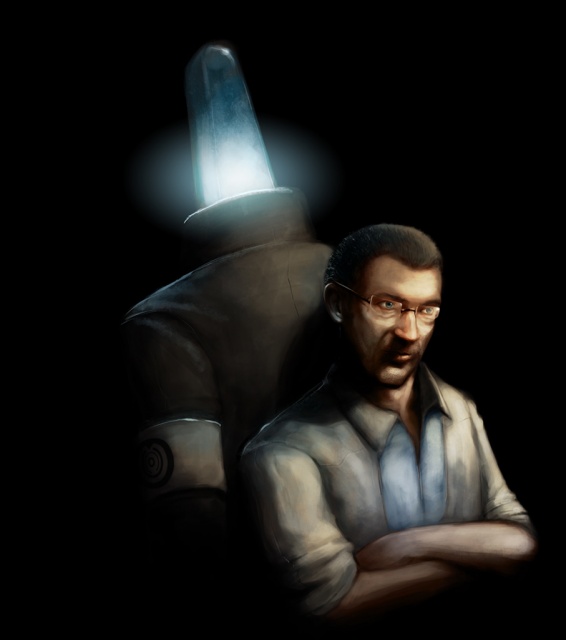 A man with a crystal as his head…..now Ive seen every thing!

Joe: When I joined the team about 2 years ago, Tay already had a fairly clear vision of what he wanted to accomplish with the tone and setting, and I think it complemented perfectly with my personal preferences in writing. For a good few years now, I’ve been obsessed with the idea of insanity in literature – going as far as to researching it for my university dissertation – and there’s something extremely appealing to me in the kind of low fantasy that can be found in films like Pan’s Labyrinth. That feeling of an innocent or fantastical world being slightly corrupted is endlessly fascinating to me. It makes the entire thing seem a lot more grounded.

6) What games ( or mods ) have you taken inspiration from?

Tay : One of the earliest games we’ve taken inspiration from was Psychonauts, as Matt was infatuated with that game and me too but to a lesser degree. I think that inspired a big part of our “psychics” angle with the game. Otherwise I’ve also been heavily influenced by the Silent Hill series (big fan) and American McGee’s Alice for the spot-on art direction back in those days. Another recent favourite of mine was the Mass Effect series, which, in my opinion, had a rather sublime space opera feeling to it.

A midget with a top hat? NOW Ive seen every thing.

7) What is one of the major problems you have experienced so far ?

Tay : I was definitely haphazard with the management of the team earlier as real life and modding overlaps and I struggle to find a good balance between both, and in many ways, I still do – which is rather common for most who chose the modding path. The goals were initially very unclear and the team not very well knit together but I learned on job and have (hopefully) become a more efficient taskmaster since then lol.

Arran: I can relate to that. It’s always a hefty task to handle a full time day job, social life, girlfriend etc with the modding work. Finding that balance will always allude me, so it’s a case of putting priorities in order. Despite the lulls in production, I will speak to Tay pretty much every day about ideas and direction. He probably thinks he drives everyone insane haha, but it keeps me motivated and on track.

Tay: Another thing is the bad rep we often get for being, apparently, “artistic” – I’m sure Roger Ebert will greatly disagree lol. However, all joking aside, there is a tremendous amount of expectations from mods in the gaming community these days that I feel have worked against modding as a whole. We expect way too much from a bunch of amateurs who now have to struggle to keep up with the industry standard that employs hundreds of people with vast funding and resources; I think this is why it’s been a while since any new mods have cropped up that really tries to break the mold. The spirit of “modding for fun” is slowly fading away to make way with “how can we look as good as AAA titles” and don’t get me wrong, professionalism in mods is a great base but I think people are getting a lot harsher when judging mods who do not live up to that standard. It is also important to note that, while games can be artistic, that does not necessarily exempt them from good gameplay, take the Bioshock series for example, their art direction is absolutely spot-on yet their gameplay compliments that. People tend to think “artists” are one-dimensional creatures who only care about aesthetics and that’s true to some degree – it is our job to care about aesthetics; but as game artists you learn how to take gameplay into account as well and that’s what make a game, a collection of determined artists and designers working together.

Arran: You’re never going to please everyone. There will always people that will not appreciate your work, but it’s not really something you can change. Same goes for this whole idea of the community treating and comparing mods to fully fledged games. To me, that is the last of my worries. You need to take into account for what is most important for the team and stay on track.

As Tay mentioned, when you lack the workforce and funding that powers a studio, you can’t get too ahead of yourself, unless you want to drive the whole thing into the ground. It’s not surprising then that the mods that try to shine and compete take far longer to make it to the public.

8) What is the estimated release date of the mod?

Tay : We will avoid the “When it’s done” cliche and go with “probably somewhere in 2012, Valve time” instead.

If you would like to know or see some more of the mod or dev’s check these links:

0161
© Most Impressive and Popular Game Mods | History of Dota. All rights reserved.