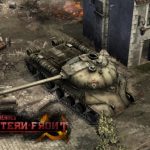 You are reading
Eastern Front Updated 1.40

The update comes with various bug fixes and balance changes further improving the mod. Also, several other additions such as new music for the Soviets and new reward units for the Soviet forces are added in this patch.

Be sure to check the mod out on ModDB and download it here. If you really want to support the mod then you can donate to help keep it alive here

013
© Most Impressive and Popular Game Mods | History of Dota. All rights reserved.