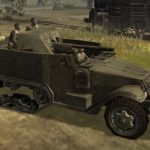 You are reading
Cross Of Iron Updated 1.20

Company of Heroes mod Cross of Iron has just released a new update. The major new feature in this update is the addition of a third column on all the mod’s doctrines. That’s right, all twelve doctrines have received a third column, featuring the new units and abilities that the team are introducing into the mod. From emplacements to flamethrower wielding sappers, there are plenty of additions in this update and every army is getting some new toys to play with.