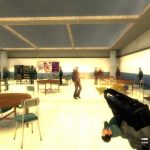 Note: This post is purely the opinion of the author and does not represent the overall view of Mod Sentry (though it comes pretty close), so the rest of our content isn’t suddenly evil just because the author has a view that opposes the majority on this issue.

It seems a new wave of video game violence controversy is sweeping the globe, only this time most the criticisms are coming from within the gaming community as opposed to the mainstream media. After The Escapist posted an article with an interview with Pawnstick one of the people behind School Shooter: North America Tour (and the hilarious looking Half-Mind 2 and the satirical Checkerboarded Hopes 2) news about the mod spread like wildfire across the internet. The gaming media was needless to say appalled at this clearly tasteless game and all posted sensationalist news pieces about how the creators were clearly sick pathetic excuses for human beings. On the other hand if you actually look at what other titles Checkerboarded Studios are working on you will realise that they are not into making the typical kinds of mods we see crop up on ModDB each.

I realise I might take some flack for saying this, but is it such a big deal? For one the modding community has long enjoyed a large amount of creative freedom which has produced countless unique games that wouldn’t see the light of day in a commercial environment. Mods like Dear Esther can now be turned into commercial releases thanks to the freedom of the modding community. So what’s so wrong with continuing to explore new ground, sure it may not be the most tasteful thing in the world but isn’t this what the modding community is for. Hell, if we look at what I used to enjoy doing in Liberty City then it’s not much different from this, walking into the hospital on the first island and taking as many people out quickly before holing up against waves of SWAT teams. I couldn’t tell you why I enjoyed it so much, only that I wouldn’t ever consider doing it in real life. Then again I suppose nobody has ever done it in real life which makes it perfectly acceptable gameplay right? (unless someone has done that in real life and no one cared enough to shout about it because it wasn’t as horrifying as a school shooting)

Then there are the people arguing that this is only ammo for groups who want to ban violent video games, because people who already have it in their heads that violent video games are dangerous tools to create a new wave of murdering teens really need more ammo…In the meantime the gaming industry continues to make games like Grand Theft Auto and Postal, which the gaming community protects because the sole object is not to just randomly murder innocent people (well maybe not Postal) but that just happens to be the most enjoyable part of the game. Of course those games are satirical parodies of something or other while this mod is just meaningless violence… or something right? I mean, the guys behind Half-Mind 2 and Checkerboarded Hopes 2 clearly don’t make satirical games.

I’m sorry if this offends anyone, but seriously gaming community, what the fuck? Something is art until it personally offends us in which case it is tasteless and sick? How can anyone seriously defend the gaming industry and games that break boundaries and offend major news networks on the basis of art if they do the same thing when something offends them. Anyway, it’s not as if you are shooting children, the mod is using the stock citizens at the moment so it’s more like College Shooter if anything.

Feel free to post any completely serious violent threats to the author of this article below (extra points for missing the irony of doing so in the process!)

03
© Most Impressive and Popular Game Mods | History of Dota. All rights reserved.