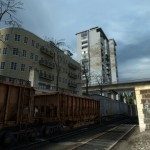 You are reading
Precursor Released

A single player mod for Half-Life: Episode II, Precursor is set prior to the events of Half-Life 2 and as the name suggests, it acts as a precursor to the Half-Life 2 games. The mod looks like an enjoyable short campaign for any Half-Life 2 fans. It also features two voice actors who lend their talent to the mod; Annelia Heed and Christopher Papastefanou. I’ve already played through the campaign and will have a review up shortly but I will say that it is definitely worth the download.

08
© Most Impressive and Popular Game Mods | History of Dota. All rights reserved.