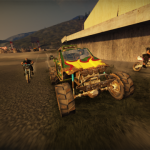 The FUEL: REFUELED mod for FUEL has just been updated; this update has brought some interesting changes that fans will be sure to welcome whilst the creator Vetron has also started a several competitions to reward fans with some free Steam games.

First off the updates; the mod has now been made available to demo players so if you’ve been on the fence over buying FUEL but felt the vanilla gameplay wasn’t up to scratch can get a look at the mod which vastly improves it without purchasing it. Vetron has also stated that the only limits will be the ones imposed by the demo; otherwise you’ll have the full mod experience which is great news.

Another change was the removal of vehicle specific races, now instead of picking between several vehicles of the same type you will be able to choose from any of the vehicles from the game which as you could imagine, will lead to some interesting races. This includes singleplayer and multiplayer races. This leads onto the multiplayer improvements; previously there were issues with playing with players playing vanilla FUEL, now with the new compatibility mode, players will be able to play together online without problems.

Players will also notice that the vehicles cameras have improved in this release; the update improves the cameras on bikes and ATVs as previously they were not very practical. Finally French users can rejoice as the mod fully supports the French language with support for German on the way.

Now for the competitions that Vetron is running. There are three competitions with Steam game prizes. Firstly you can win Steam games up to a value of £7 for writing a decent constructive review on the ModDB reviews section. The score you give isn’t taken into account. This is pretty much what we aim to do at Mod Sentry so anyone interested in writing for us should go for this one.

The second competition is a £4 game for a random review, any review could win this one regardless of how well written it is. Finally you can win a £4 game for posting your three best screenshots in this forum thread. The screenshots can be from the full game or the demo so get snapping people.