You are reading
Fistful Of Frags Updated 3.5

The western Source mod Fistful of Frags has just been updated to version 3.5. With this update comes the announcement that the mod is now officially out of beta. This is great news for the mod which has been in development for five years , steadily becoming one of the top multiplayer Source mods, along with the likes of Goldeneye: Source, Zombie Panic Source and Dystopia. It is unsurprising that the development team consider it completed, as the mod is very well polished and this update has brought plenty more fixes and improvements it.

This update brings some interesting changes to the mod, such as a fully implemented dual wielding system, allowing the player to mix and match various handguns, resulting in 36 different possible combinations that they can use. Several new weapons have been added to the mod along with a new map called Railhouse. Other changes include the return of an old gamemode (that had been removed in a previous update) and a massively improved AI, promising less robotic behaviour. 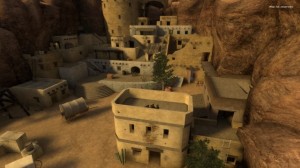 Overall, it looks to be a great release! I’d highly recommend it to anybody interested. Now is the best time to jump in and have some fun! Not to forget that it’s one of the few Source mods with a cooperative mode for those who enjoy gaming with friends. Check it out on ModDB here and download it either here or straight off Desura

056
© Most Impressive and Popular Game Mods | History of Dota. All rights reserved.