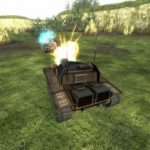 You are reading
Empires Arrives On Steam

One of the first Source mods to mix RTS and FPS elements, the excellent Empires mod finally arrives on Steam. Bringing the mod to a wider audience and making it much easier to install and update your game.

The Empires mod is incredibly old similar to Zombie Panic: Source and is now in its eighth year of development. Having originated as a mod for Battlefield 1942, in 2004 it was changed on the newly released Source engine.

The mod features a large range of weapons on top of a plethora of vehicles and buildings that each side will need to utilise to win. I must confess to have not played it in a very long time but I will be taking a look at how it’s progressed now it’s on Steam.

099
© Most Impressive and Popular Game Mods | History of Dota. All rights reserved.