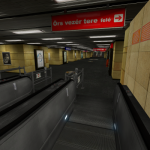 In previous posts I have mentioned a upcomming project that I will be using Mod Sentry to help launch. I’ve often spoke about wanting to find new ways to support the Modding community and this is where I plan to begin.

So what is it anyway?

The Source Community Expansion Pack; or Source CEP which I will refer to it from now on is something that I hope will become a valuable resource within the Source community. It’s heavily inspired (complete rip off)  by the Neverwinter Nights CEP which was an incredible resource for developers and fans alike. It was a giant colloboration between multiple modders bringing some of the best custom content together into one easy to install pack which could be used by any mod.

It gave the mod makers much more flexibility which led to a more diverse and interesting number of mods. The sheer amount of content and the fact that with only the CEP you would be able to run multiple mods without downloading multiple packages for different mods made it incredibly convenient.

I’m hoping to achieve something similar with the Source CEP. I want to build a library of textures, models and other custom content that both mod makers and mappers can use within their creations without repackaging the same content over and over. I was partly inspired by the 100mb maps that are incredible looking but too large to feasibly put on any server. While download speeds have increased. It’s still an inconvenience.

How do you plan on achieving this?

Well first off I plan on contacting several map makers who have maps full of custom content to try to convince them to come onboard. I’m hoping to appeal to mapmakers who have maps with considerably large maps to see how far we could reduce the map filesize with this idea while providing content for the community. After we have several people onboard I’ll look at how we can encourage people to contribute content. Possibly through some form of sponsored reward system for submitting certain amounts of content and by recognising everyone who contributed.

I realise that this idea may sound strange, some of you may even consider me posting it here to be a bad idea but in my opinion Mod Sentry was made to support the community and this is what I want to do. This is still very much a concept but hopefully it will progress into something more than that. For now I’m taking it one step at a time. For other sites who want to support the idea, please get in touch, I want this to be a community project.

014
© Most Impressive and Popular Game Mods | History of Dota. All rights reserved.