You are reading
How To Play Zombie Panic: Source 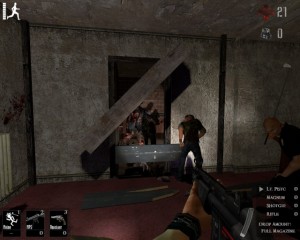 The main aim of Zombie Panic: Source is to be one of the remaining human players at the end of a round. That is the goal. If you die, you become a zombie, then your out of the running to win. Once your there you set out to prevent other players from surviving. At the beginning you can choose to start as a Human or a Zombie. Yes you can actually choose to play as a Zombie from the beginning. Most people obviously go straight to playing as a Human but some players actually do choose to play as a Zombie at the beginning. Usually it’s either because they like playing as a Zombie or because they went the wrong way.

But I digress, once in several people are selected to be Zombies presuming not enough players have decided to start as Zombies. Then the Human team will have a massive scramble to find anything decent to defend themselves with, there are only so many shotguns and rifles so they are in pretty high demand. We’ll look at good ways to distribute this equipment in the next section. For now just know that you’re probably not going to get anything good unless you are lucky. Next you’ll either be looking for somewhere to hole up or getting on with the mission objectives depending on the type of map you are playing.  All the while trying to stay alive.

Part 2: Being a Credit to your Team

Now you’ve got the basics down its time to learn how to actually win a game. As a game progresses the number of Human players decreases and it gradually gets more difficult. It’s important to prevent this happening as much as possible. You can do this just by focusing on teamwork. Don’t just grab every weapon, ammopack and healthpack you see. You need to be communicating with your team about these things. Most players use microphones but there are plenty of voice commands that can get your message out quickly. You definitely don’t want to be typing when the Zombies start pouring round the corner.

distribution of weapons and ammo is important, if you have spare ammo and your teammate is out then toss him some, it’s a matter of survival. Hording ammo is going to get you nowhere. Try not to pick up anything you don’t need. Once you have got a decent distribution and people are sharing ammo when they need you still have to worry about several other things. For one, you know that nice shiny new gun your teammate gave you? That’s for the benefit of the team, not so you can try to imitate Rambo. You have to be on the ball and be covering your teammates. Just remember, if they go down then that is another Zombie you’re going to have to deal with.

This one needs to be said, you have to stick together. Groups of two to three should suffice. At the beginning you’ll find most the team moves together and on some maps that may be a necessity from the get go. A lone player is an easy target for Zombies and you should not forget that. You might be able to deal with one or two Zombies but when they start pouring in then you ain’t getting out alive.

So it’s over, you didn’t make it as a Human, I’m sorry. You had a good run though, and now it’s time to get revenge on that jerk who didn’t save you or that guy who stole the ammo you needed despite not having the necessary gun. But, it’s not easy to get kills as a Zombie, especially by yourself. Here are some tips to play an effective Zombie. First off, you want to be sticking with other Zombies and picking off the lone players, the weak links if you will. Your strength is numbers so initially your goal should be to thin the herd a little. Snap at the edges until you can overwhelm the main group. Often you’ll find players make this easy for you by not sticking together.

In this kind of situation, you just need to keep charging!

Go for the ones without decent guns first, they are the easiest kills. It’s easy to run out of pistol ammo and melee isn’t very effective for Humans as they often have to take some damage to get a kill. The ones with shotguns and rifles will be considerably more difficult. With them it’s more of a war of attrition than anything else. You need to force them to waste ammo, do what you can to taunt them into firing. You can continually charge them if you want but it’s going to be more time-consuming than the other method. Try zigzagging, moving unexpectedly. It’s often hard to convince them to part with their ammo but you’ll find with time there are certain ways to convince a player to pull the trigger.

Not in the mood for reading? Check out this official video which covers all the important survival tips for humans.

Have any advice? Think I missed something? Tell us in the comments below!

0144
© Most Impressive and Popular Game Mods | History of Dota. All rights reserved.