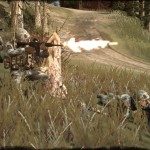 The team behind the impressive looking Company of Heroes: Modern Combat mod have released a new trailer showcasing some of the gameplay in the mod. The trailer also demonstrates some of the units we are going to be using and destroying in the mod. So go watch it now but keep in mind that they haven’t begun working on the environments yet, so it’s still using the original Company of Heroes maps:

You can track the mod now on ModDB here