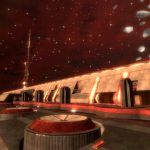 You are reading
One To Watch: Titan: XCIX

Not only is it one to watch, but it’s also just entering beta testing and has already shown a great deal of potential. Not that we would expect anything less from one of the original developers of the incredible Jailbreak: Source. He’s been teasing us with pictures for the past months but now we’re been treated to a full news post. The mod promises less gung-ho FPS action in favour of exploration and problem-solving. Based on what we’ve seen in the screenshots and videos so far we can definitely say we are looking forward to exploring the beautiful environment he has created.

Toto, I’ve a feeling we’re not in Kansas anymore.

It’s a science fiction mod set on a spaceship and from what we’ve seen in the video, we’ll also get to leave the spaceship and walk around the exterior in a spacesuit. He’s currently aiming for a release between Spring and Summer and it’s already near release though he is in need of talented voice actors so do get in touch with him if you can do it. We love a good Source mod here at Mod Sentry and it’s rare that we see single-player mods of such quality so we can’t wait to play through this one.

You can check the ModDB page out here and video below.